With the number of long periods of wet weather over the last two years, we have fielded numerous calls looking for information regarding the type of rust the growers may have. Orange rust and Late Leaf (yellow) rust are distinctly different both in their appearance as well as their severity.

Orange rust, the most common and serious of the rust diseases attacking brambles, can be caused by two stages of a single rust fungus. Aethuriomyces peckianus is the long-cycled state that typically affects black raspberries. Gymnoconia nitens is the short-cycled state of the rust fungus in erect, and trailing blackberries.
Neither fungus has an alternate host, which is common for other rust diseases of raspberry. Orange rust is not known to affect red raspberries.

In the spring, leaves on infected plants appear stunted, and misshapen. In some cases, orange spores can be detected on the underside of lower leaves. Spores will spread the disease to other plants and will spread to the plants root system by fall. Orange rust is systemic in the plant.

Each spring, inspect plants for any signs of the disease. Southeast U.S. growers may begin seeing symptoms as early as March, late April or May in the north. It is critical to identify and control this early – if not controlled, it will go systemic in the plant, kill it, and provide inoculum to other plants. Immediately dig, remove, and destroy infected plants early, before pustules break open and spores can spread. Rally, Tilt or Abound are main tools for chemical control of orange rust and should be applied early at first sign of pustules. Sulfur sprays are an option for organic growers. Sound cultural practices are also key for managing orange rust.

Remove and destroy all wild blackberry and wild black raspberry plants in the area, as they harbor the disease.

Good air movement throughout the planting is important. Use good thinning and pruning practices, and keep weeds to a minimum.

Orange rust (top & bottom photos) seen with very distinct orange sporulation on the undersides of leaves. Young, infected primocanes are often stunted. Leaf lesions are blister-like in appearance, and they are more pronounced on the periphery of the leaf, as opposed to the leaf center. Spores are generally round with lobed margins, as opposed to spiny.

LATE LEAF (YELLOW) RUST
A potentially serious disease of red raspberries, late leaf rust (Pucciniastrum Americanum) can affect leaves, canes, and fruit. It appears in late July or early August first on lower foliage with small chlorotic or yellow areas initially. Unless it’s severe, foliar infections may be diffi cult to see. More advanced symptoms include the appearance of yellow masses on the underside of leaves. The yellow presence on fruit makes them not marketable. It is important to control when first seen, as it can spread rapidly during wet periods. We have seen it in grower fi elds where it will completely defoliate the plant and eliminate harvest. Fall bearing varieties Heritage, Caroline and Anne are particularly susceptible. 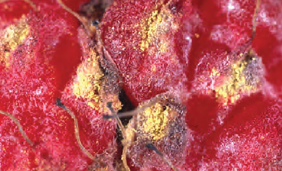 Controls for Late Leaf (Yellow) Rust are similar to Orange Rust. Chemical control rotating Rally, Tilt or Abound fungicides are warranted beginning at first signs of infection. Unlike orange rust, late leaf rust is not systemic and can be eliminated from the planting. Most of the fungicides that are rated for late leaf are also rated for other leaf/cane diseases. Cultural controls include trellising, proper spacing, cane/leaf management, use of
drip irrigation. With orange rust and late leaf (yellow) rust, if you identify and control it successfully early, you
may not see the advanced symptoms that are extremely detrimental to your crop and planting.

Please feel free to contact us with any questions.

Cane and leaf rust. Lesions are found throughout the underside of the leaf, and sporulating lesions are generally yellow in appearance and do not distort the leaf. Lesions are also found on canes. Above photos courtesy of “Is it Blackberry Leaf Rust or Orange Rust?” www.raspberryblackberry.com
Authors John R. Clark, University of Arkansas and Phil Brannen, University of Georgia

Also featured in this newsletter: