Due to the fact that strawberry plants grow close to the soil, and given they blossom earlier than many other crops, they are at risk for spring frost and freeze damage. 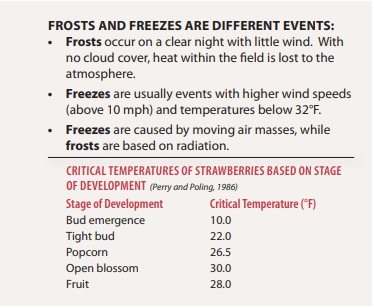 1. Over-head watering: Over-head watering works based on the principle of latent heat of fusion – as water turns to ice, heat is released. This heat maintains the plant tissue at just above freezing. If the water stops during the night while the temperature is below freezing, the process reverses –heat is removed from the plant tissue and the tissue will freeze. To avoid this, watering must continue until the air temperature rises above 32°F and the ice has melted. Over-head watering may be combined with row covers or used independently and requires a calibrated emitter system to be sure the required water is constantly being provided. It has a proven track record of maintaining the temperature of the flower buds above critical temperatures. On the negative side, it may lead to saturated soils and root diseases; if the water stops at any point when the air temperature is below the 32°F the buds will freeze.

2. Row covers: Row covers are spun bonded polypropylene and vary in weight from 0.45 oz to 4 oz. Cloth sheets also work for small areas. Research has shown that using two layers of a 1 oz weight row cover provides somewhat better frost protection than a single layer of 2 oz cover, likely due to air between the layers. Heavier covers (3-4oz) work for frost protection but restrict light too much and need to be removed as soon as temperatures are above freezing. Avoid placing plastic over the rows unless it is suspended and will not touch the plants. Wherever the plastic touches the plant – leaf, flower – the plant tissues will be killed in freezing temperatures.

3. Wind machines/Return Stack Heaters: Wind machines carry initial high expense but on sites that are frost prone this method may pay for itself. A temperature inversion, a weather condition where temperatures increase with altitude causing warm air to overlay cold air at the surface, and wind speeds less than 5 mph are required for this system to be effective. Acreage covered varies by model and the strength of the temperature inversion, generally 1 acre – 20 acres. May be used combined with supplemental heat for large areas, or when the temperature is expected to be down to the low 20s, or with a weak temperature inversion. Return Stack Heaters hold approximately five gallons of fuel with 20-40 heaters needed per acre. They are effective when used alone and combined with wind machines. Light every second or third heater initially and then light the rest. This will allow heat to move through the field without a big burst of heat that may puncture the inversion layer.

KEY TAKEAWAYS
• Frost injury can cause significant damage to strawberry plants, especially during open blossom but also to unopened buds, if it’s cold enough. Strawberry fields are often colder at ground level than the weather forecast suggest.
• Irrigation for frost protection works because heat is released as water freezes. Rates must be adjusted to account for evaporative cooling due to winds and relative humidity. More water is required on windy nights and failure to apply enough water can cause greater damage than no irrigation.
• Dew point is an important factor in determining the optimum time for starting frost protection. Start temperature for frost protection is higher when humidity is low, lower when the humidity is high.
• Each form of frost protection has its pros and cons, so evaluation of systems based on your individual circumstance is important.

Also featured in this newsletter: